The Forecast of Franchising

The Forecast of Franchising 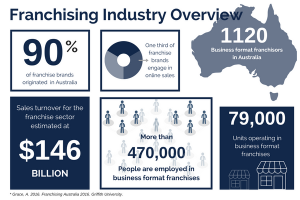 Franchising has been defined by the Franchise Council of Australia as “an innovative method of distributing goods and services – providing small business with the tools of big business”. So what is the current profile of this business format and where will it lead? A 2016 report conducted by franchising experts sponsored by the Franchise Council of Australia provides us with valuable insight into the future of franchising.

This report highlighted that as of 2016, there were 1120 business format franchisors in Australia employing 470,000 people across 79,000 franchises. The sales turnover for the franchise sector estimated at $146 billion.

To give an insight into the profile of franchising, its performance throughout the past two years can be analysed. Despite being faced with a backdrop of a relatively flat economy and a weakened retail sector, the franchising sector has performed significantly well. Brands have continued to grow and remain sustainable, sales turnover have slightly risen, employment has steadily risen, more permanent full-time jobs have resulted and further growth is predicted for the following 12 months. From the evidence of the report, the Australian franchising sector can be seen as a maturing sector with the capacity to hold its own within a constrained economic climate.

From the consolidation of the sector from 2008-2010 during the global financial crisis, the sector has recovered and since been stabilised due to increasing levels of consumer confidence, low inflation and low interest rates. Therefore a primary area of study was explored focused on the future asking ‘what we can predict for franchise sector growth through 2018 to 2012’?

The following table shows the predictions drawn from the report. 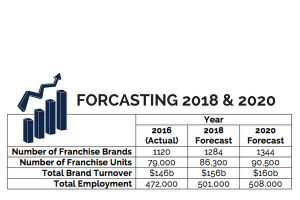 Key findings from the study that are important to note include:

– During the initial years from 2006, the total brand turnover fluctuated within a narrow band of $128 billion and $131 billion but increased with a strong positive trend from 2012 reaching $146 billion in 2016

– The retail sector is expected to increase further in the future

It is also interesting when looking toward the future at the international markets as well as digital trends. In 2016, 90% of franchise brands operating in Australia were found to have originated here with one third of franchisors having entered international markets. In terms of the digital presence, it was discovered that one third of franchise brands engage with customers through online sales.

The franchise sector is forecasted for overall growth despite the challenges posed by the constantly changing economic conditions.