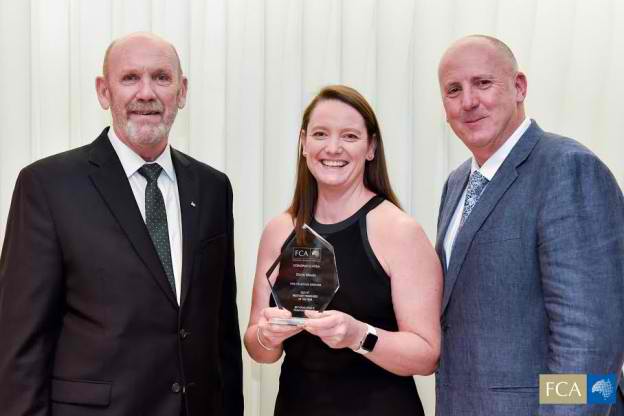 The Finn Franchise Broker, who is based on the Sunshine Coast, received the Multi Unit Franchisee of the Year Award at the industry awards held in Brisbane earlier this month.
The award is in recognition of her work supporting local franchises such as The Coffee Club, Guzmen Y Gomez, Subway, Gloria Jeans, Domino’s and Red Rooster.

Dione has been with specialist business broker firm Finn Franchise Brokers since 2010. Along with the Sunshine Coast, she also works with businesses in Far North Queensland. Servicing the franchise sector, she helps franchisees to sell their business or helps franchisors to find franchisees for their new sites. Support includes assisting buyers and sellers with valuations, business profiling, due diligence, marketing, communications and contracts. Other well-known brands she has worked with across the state include Muffin Break, Pizza Hut, Boost Juice, Poolwerx, Battery World and Zarraffa’s Coffee.

Dione said it was an “absolute honour to receive the award in recognition of her team’s hard work across the two Queensland regions. Helping families make life changing decisions by achieving their dream of becoming a business owner, is something we are very passionate about. We’re a professional services business so it’s really important that the franchisees and the clientele within our network territory understand what we do and the value we can add. So we spend a lot of time actually out in the field talking to franchisees on a day-to-day basis, helping them with their exit planning strategies.”

Len Ferguson, Co-Founder and Director of Finn Franchise Brokers, said Dione’s award was well deserved and she had built a “strong reputation on the Sunshine Coast and Far North Queensland as the first person many franchise owners turn to when considering selling their franchise. Dione is one of our first franchise partners and has seen the evolution of our franchise system. Now more than ever Dione is an outstanding contributor to the growth and development of the franchise along with other franchise partners.”

Finn Franchise Brokers was also recognised at the national awards in 2016, when it was named finalist in the category of Franchisor of the Year.

Dione is now a finalist in the FCA’s national awards which will be held on the Gold Coast on October 10.