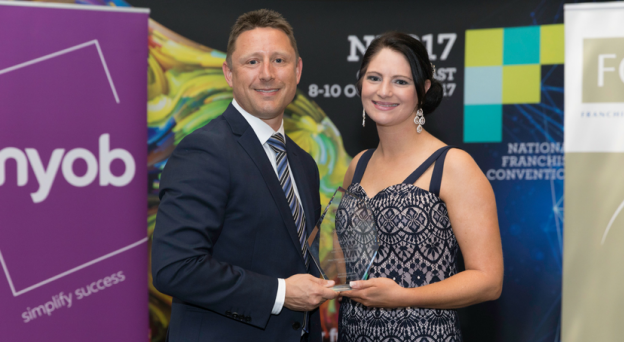 We are thrilled to announce Franchise Brokers Perth North & Regional WA were the recipients of two national awards at the FCA’s Excellence in Franchising Awards held 11th October 2017 on the Gold Coast. This is the first time a member of The Finn Group has received Franchise Council of Australia Excellence in Franchising Award nationally after being finalists several times.

Ryan Willsher took out the National Multi-Unit Franchisee of the Year as well as the award for Franchisee Community Responsibility and Contribution alongside Kate Longman who works with Ryan in Western Australia.

After winning the award for Franchisee Community Responsibility and Contribution in Western Australia this year, Ryan & Kate have taken out the national award in this category. This award recognises the commitment they have made to their community by raising funds for local charities, as well as hosting information sessions with their fellow WA Finn Franchise Partners to educate and empower franchisees.

“Winning these Awards means a lot for both me and my team, but also our brand. We’re still a relatively young brand so to be able to receive an Award like this means a lot for everyone involved. It will definitely help us win business, People will trust us more and it will give us a lot of credibility,” Ryan said upon receiving the award.

It’s been a successful month for Ryan. Earlier in October at The Finn Group National Conference, he was recognised for his efforts winning the award for Finn Franchise Brokers -Franchise Partner of the Year.

We also congratulate Sunshine Coast and North QLD’s Franchise Broker, Dione Mauric, who was also nominated in the Multi-Unit Franchisee of the Year category after taking this award out for QLD earlier this year. Kate Longman is also to be commended on her nomination for Franchise Woman of the Year after winning this award at the Western Australian state awards for the past two years.

“As an organisation, we work really hard and it’s outstanding to see Ryan, one of our top performers, recognised for this award. It’s important to also recognise that our franchise partners don’t have success without a great support structure around them. Their families, team members, colleagues, fellow franchise partners…. and the franchisor a little bit too! I feel that this is going to be the first of many awards for our young group,” said Len Ferguson, Managing Director of The Finn Group.

Many congratulations to all of our winners and nominees – we are very proud of your achievements.